The Second City is thrilled to announce that VP of Sales Operations Parisa Jalili has been promoted to Chief Operating Officer, effective immediately. “Parisa is uniquely qualified to step into the role of COO as we redesign,” says Second City President Steve Johnston. “Her extensive prior leadership experience with effectively driving and implementing new processes and systems in the corporate world is an incredible asset to complement Second City’s new creative leadership, as much of her work will focus on guaranteeing our DEI transformation reaches all corners of the organization.”

“This is an incredible opportunity in Second City’s history to rebuild everything for tangible, lasting results that ensure the company is communicating and functioning better than ever. I’m excited to dig in and get to work, because I know Second City is beyond capable of immense positive change during this transformative time in the company’s history,” says Jalili.

Prior to joining The Second City in 2019, Jalili worked in global sales enablement and operations for Verizon.

“We are fully committed to this work,” says Vanessa L. Smith, Managing Director, Vantage Solutions LLC. “We understand the scope and scale of what is required to transform Second City’s culture. We only undertake this challenge because SC realizes the urgency in making these changes and is fully dedicated to these efforts. Second City is serious. And we are, too.”

“Vantage is confident that The Second City’s decision to partner with our team will help bring management and employees together to build a culture of which past, present and future talent can be proud,” Smith says.

“I am thrilled to have been selected as The Second City’s DEI partner, and I look forward to leading the efforts to align talent and people priorities with business priorities. Realizing and embracing the value Diversity, Equity, and Inclusion will bring to the organization will be a rewarding experience for Second City’s employees, students, clients, and the communities they serve,” says Dr. Morris.

Dr. Christal Morris has worked for many Fortune 500 organizations leading human capital functions, diversity, and inclusion. She served as Global Head of Inclusion, Diversity for Willis Towers Watson where she was responsible for developing and implementing inclusion and diversity efforts for over 40,000 colleagues located in more than 120 countries. Her portfolio included broadening leadership accountability for diversity through targeted visible leadership commitment; design and delivery of diversity and inclusion courses to address unconscious bias and cross-cultural competence, as well as talent management and work-life flexibility programs. She has also held leadership roles in healthcare, entertainment, and manufacturing organizations. Originally from San Diego, California, Morris is a Doctor of Education in Organizational Leadership with a master’s degree in organizational management and a Bachelor of Arts in sociology.

Anthony LeBlanc was interviewed by WBEZ about Second City’s commitment to building an equitable, inclusive, anti-racist company. Listen to the interview here.

After a brief introduction from Anthony LeBlanc, Steve Johnston, and D’Arcy Stuart, human resources executive and licensed attorney Maya Bordeaux summarized the themes from the Second City town hall meetings, describing how the company has fallen short and failed its staff and talent. She explained how her recommended best practices align with the changes The Second City has committed to implementing in order to overhaul its operations and culture. Ms. Bordeaux recommended action under the following 5 diversity, equity, and inclusion (DEI) pillars:

Following the presentation, Interim Executive Producer Anthony LeBlanc announced the first action items that will be going into effect with support of Second City leadership, including Parisa Jalili, VP of Sales Operations, who will lead and oversee the implementation of new initiatives, systems, and processes. Parisa’s extensive experience in operational strategy and implementation at scale across large businesses is a valuable asset to Second City’s rebuilding.

The Second City will be hosting a webinar presentation updating you on The Second City’s commitment to overhauling our culture, operations, and infrastructure on Saturday, June 20 at 2:30 PM PT/ 4:30 PM CT/ 5:30 PM ET. The meeting will last approximately one hour. Please register here to receive the webinar link.

As Second City has committed to transparency and accountability, this presentation by HR consultant and attorney Maya Bordeaux and Second City leadership is the next step in our rebuilding process. If you are unable to attend or would prefer to be updated digitally, Second City’s commitments and action items will also be available here by Sunday afternoon.

June 11: The Second City Response Letter to the BIPOC, Latinx, and LGBTQIA+ communities

The Second City shared this response to open letters shared by our BIPOC, Latinx, LGBTQIA+, APIMEDA, and related feedback. 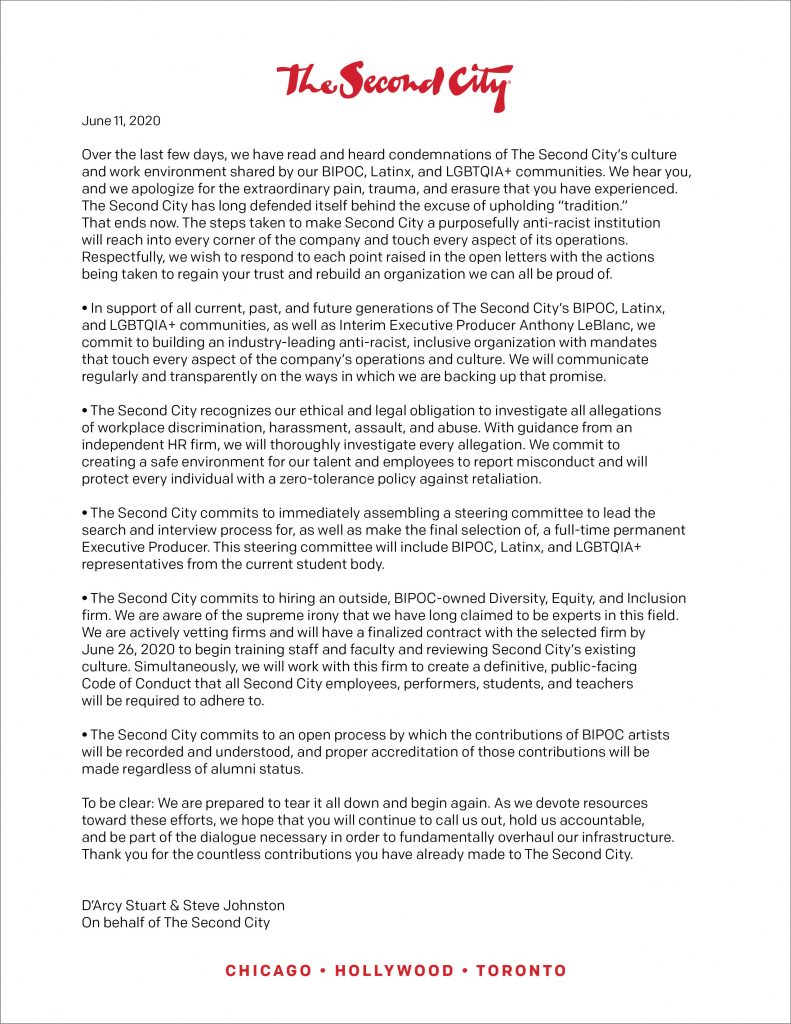 The Second City announces that the company’s new Interim Executive Producer is Anthony LeBlanc, effective immediately. Most recently, LeBlanc has served as an Artistic Director for The Second City, as well as an acting coach for Nickelodeon and part-time faculty member at Columbia College Chicago. LeBlanc is a Second City alum who wrote and performed in two original Chicago Mainstage revues. He has been a teacher and resident director for the company, directing several resident stage and theatrical productions in Chicago and Washington, D.C., including Soul Brother, Where Art Thou? for The Second City e.t.c. and the Helen Hayes-nominated Nothing to Lose (But Our Chains) at Woolly Mammoth Theatre Company. A native of Beaumont, Texas, LeBlanc holds a degree in Computer Science and Physics from Loyola University New Orleans.

“While The Second City has sometimes made strides in the diversity of talent performing on our stages, we have grossly fallen short when it comes to supporting that talent–and diversity at Second City–as whole. We must face the reality of our failings as an organization and hear the voices of our BIPOC performers, alumni, staff, students, and audience. We need to do better…because our community deserves better. I, along with the rest of the leadership of The Second City, are committed to making fundamental and long lasting changes to our company and the many communities we touch. I look forward to being a part of those changes and helping Second City catch up to the present, and, in turn, move towards a better future,” says LeBlanc.

The Second City will also begin its search for a long term Executive Producer as previously announced.

Everyone wants a response, but there are no set of words right now that will be enough. There is no excuse. The Second City has made so many mistakes, and we–the leadership–are sorry. And now we are putting our energy behind taking action, even if the community doesn’t feel that we have the right. In this moment, you deserve to hear clear, specific actions that will be taken.

Additionally, we commit to taking the following actions. This is just a start, and we will update you regularly.

No effective plan for completely rebuilding our diversity, inclusion and equity standards can be created without representation at the decision-making level. As an ensemble-based community, we welcome new ideas and the betterment of existing ones. Please share your ideas here.

To the Staff, Alumni, Students, and Audience Members of The Second City:

After the fallout from the closure of the groundbreaking “A Red Line Runs Through It,” The Second City tried to begin to grapple with the institutionalized racism in our society and within our own walls that allowed such a traumatic event to fester and has created lasting pain for our employees and artists. However, we failed.

There are so many things we didn’t do, but one of the things we did do was to engage facilitators in the field of anti-racism. I bring this up to acknowledge that it didn’t work. White employees of the Second City, myself included, participated in regular sessions taking place over months which outlined in detail the inherent biases in white society, and how those, consciously and unconsciously, oppress BIPOC. Two years ago, I learned about one of the pillars of what I understand to be central to the Black Lives Matter movement: it is not enough to not be a racist; you must be anti-racist.

The Second City cannot begin to call itself anti-racist. That is one of the great failures of my life. The irony is that what attracts so many people to Second City – myself included – is that it gives a public platform to a group of people to speak truth to power and use the undeniable power of comedy to force a recognition of injustice. Over the years, Second City has never shied away from talking about oppression. On stage, we have always been on the right side of the issue, and of that, I am very proud. On stage, we dealt with the absurdity of the equal opportunity narrative that society uses to oppress BIPOC. We dealt with the double standard that rationalizes violence against people of color. We dealt with the cynicism of the liberal pact with capitalism. Offstage, it’s been a different story.

The company has grown significantly – yet culturally homogeneously. There is no excuse for it, and I am not defending it. I succumbed to (what I now realize was) my unconscious biases, the biases of the theater community, and the biases of the city in which The Second City is embedded. I surrounded myself with people mostly of my own race and culture. As a theater producer, I like to think I have good instincts, not just commercially, but also as it relates to what is right. As an administrator, I have not always had good instincts. While diversifying the theater artistically, I failed to create an anti-racist environment wherein artists of color might thrive. I am so deeply and inexpressibly sorry.

The damage for this failure is done, and it’s part of the legacy of the institution I love. I care deeply about that legacy, as you might imagine, and certainly believe that on balance (even though many don’t agree right now) we have been a force for good, and change, and hope in an ugly world. To make matters worse, the theater is struggling financially as a result of the ongoing COVID-19 closures. As you know, many of our staff members have been furloughed, including BIPOC staff members. The company is not in a position to make major financial reparations at this time, if that is indeed what’s being asked. That, of course, is not the fault of anyone who has suffered from racial injustice. It’s my hope and belief that we can find multiple ways to contribute to Black Lives Matter and the many organizations working to dismantle institutionalized racism.

One thing I can do, and am doing now, ensures that the next iteration of The Second City, whatever that might be – that place for underdogs that captured me and saved my life many years ago – is led by a real underdog. I am stepping down and fully removing myself from overseeing The Second City’s operations and policies and will divest myself from the company as it stands. The next person to fill the Executive Producer position will be a member of the BIPOC community. That’s a commitment I’m proud to make.

The Second City’s leadership will continue to engage in open forums of discussion and take action on the many great suggestions that have already been made. I have always believed that art speaks for itself. I have frustrated the staff with the insistence that The Second City doesn’t engage in media tit-for-tat. If you want to know what the institution of The Second City stands for, come see a show. No matter what happens from here, that will be the truth. I am sorry for my many failures as the steward of an important cultural institution. Black stories and black artists matter. Black lives do matter.

If you would like to receive a notification when this page is updated, please fill out this form.