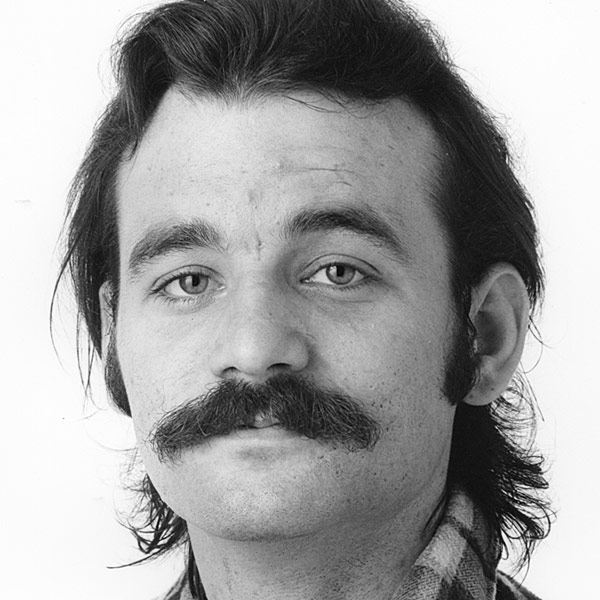 Honored with the Mark Twain Prize for American Humor in 2016

Offstage, Bill Murray is as much of an enigma as some of the characters he has played onscreen. Raised in Wilmette, Illinois, he began his comedy career at The Second City after inspiration from his older brother, Brian Doyle-Murray, and began with The Second City Touring Company. He graduated to the Mainstage in 1973, the very same week John Candy joined the company. Their cast included Betty Thomas. Legend has it that Murray once broke the arm of a heckler in the audience...but bought the guy a beer and drove him to the hospital after the show.

After his time at The Second City, Murray worked on The National Lampoon Radio Hour, later following Gilda Radner, Dan Aykroyd and John Belushi to join the cast of Saturday Night Live for its second season. His time on SNL allowed him to showcase his talent and a diverse group of characters, including “Nick,” the lounge singer, developed at Second City. In 1977, he won an Emmy for Outstanding Writing for a Variety, Music or Comedy Program, and in 2015, Rolling Stone ranked him sixth in most influential SNL cast members of all time.

Following his success on the seminal sketch show, Murray moved on to his explosive, expansive film career. His first starring role was as “Tripper Harrison” in Meatballs. In the 1980s, Murray shot to stardom with Caddyshack (Harold Ramis’ directorial debut), Stripes, Tootsie, Ghostbusters (co-written by Ramis and Aykroyd), Scrooged, Ghostbusters II, and more, many of which featured fellow Second City alums in front of or behind the camera.

Hollywood eventually allowed Murray to showcase odder, more nuanced, and dramatic characters in projects like Groundhog Day, Ed Wood, Wild Things, Rushmore, and The Royal Tenenbaums. Though he was nominated for a Golden Globe for Rushmore, Murray garnered even more critical acclaim for her work in Lost In Translation, which won him Best Actor at the BAFTAs, a Golden Globe, an Independent Spirit Award, and a Best Actor nomination at the Academy Awards.

In 2016, Murray was honored with the Mark Twain Prize for American Humor. He released a spoken word and music album, New Worlds, with German cellist Jan Vogel in 2017.

In 2001, five of the Murray brothers (Andy, Bill, Brian, Ed, Joel, and John) opened Murray Bros. Caddyshack® at World Golf Village in St. Augustine, Florida. Along with the opening of the restaurant, they launched the Murray Bros. Caddyshack® Charity Golf Tournament with the mission of partnering with various charities to raise funds that provide medical services, educational programs, lifesaving equipment, and fundraising opportunities to better the lives in communities across the country. Over its 15-year history, the tournament and its partners have raised over $4 million.