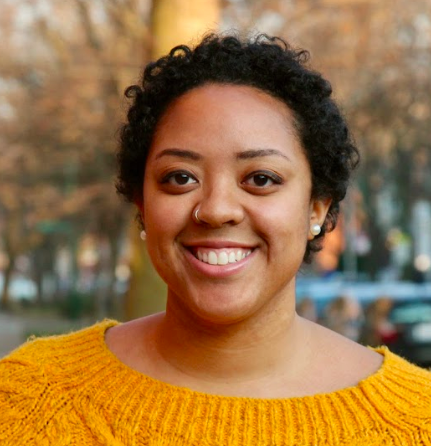 JILLIAN EBANKS (Ensemble; pronouns: She/Her/Hers) is thrilled to be a member of The Second City National Touring Company. An artist originally from New Jersey, she was awarded the 2018 NBC Bob Curry Fellowship.  Past shows include America; It’s Complicated! at The John F. Kennedy Center for the Performing Arts and The Black History Month Show.  She is the co-creator and co-producer of B.A.P.S Comedy. With a degree in sociology she refuses to use, Ebanks hopes all her hard work pays off one day when Ben & Jerry's asks her to create her very own ice cream flavor. Also, like, an invitation to the Met Gala would be cool. Follow her at @Curlyhairnocare for pictures with hella filters. She is currently represented by Grossman & Jack Talent.