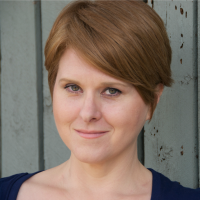 Rebekah Walendzak Slepski began teaching at The Second City in 2008. Classes include all levels of sketch comedy writing, Writing Bold Characters, Killer Comedy Structures and Writing Hilarious Satire. After graduating from the SCTC Conservatory in 2003, Rebekah went on to co-found Bare Boned Theatre and served as showrunner for the flagship production, The Ville--Chicago’s only live LGBT soap opera. Co-author of the plays, Husband & Life and The Hecubae, she has also penned Protein & Fats, a satirical yet nutritious webseries. A former associate company member of The Actors’ Gang Theater Company, she has performed in theaters across the country and made appearances on TV and in commercials from time-to-time. Rebekah holds a BA in Theatre Arts from San Jose State University.