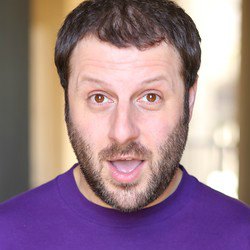 With his quick wit and versatile voice, Marty DeRosa has blended his talent for stand up comedy and his love of pro wrestling to become a favorite of both critics and fans.

As a founding member of Comedians You Should Know, the premier independently run stand up showcase in Chicago, DeRosa has had a #1 comedy album on iTunes and has been recognized as an emerging talent by Time Out Chicago. He performs stand up all over the country which lead him to a partnership with pro wrestler Colt Cabana.

The duo also collaborate on the Mystery Science Theater meets pro wrestling project $5 Wrestling, multiple web series including Worst Promo Ever & Creative Has Nothing For You.

Wrestling With Depression, DeRosa's critically acclaimed podcast, is an honest and humorous series of interviews with fellow comedians, wrestlers, and performers, reconciling the creative process with the daily struggle of depression. It has been profiled by Time Out Chicago, Comedy of Chicago and The Onion's AV Club.

Marty has performed at comedy clubs and colleges throughout the country. You can catch him virtually every night of the week on a stage somewhere saying words into a microphone. Sometimes there isn't a stage and a few times there wasn't a microphone.