Casting Announced for Queer Eye: The Musical Parody at Second City CHICAGO – Legendary Chicago comedy institution The Second City is excited to announce the cast and crew of Queer… 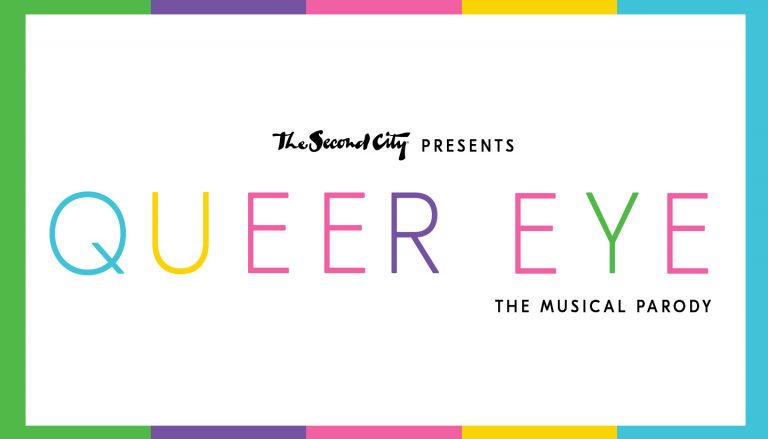 CHICAGO – Legendary Chicago comedy institution The Second City is excited to announce the cast and crew of Queer Eye: The Musical Parody, with previews set for May 26-29 and an official opening on June 2nd. Co-created and co-written by Second City Mainstage ensemble member Evan Mills and Heidi Joosten, the show will be co-directed by Mills and Stephen Schellhardt, who is also choreographer. Joosten, the composer, lyricist and orchestrator for the show, will fill the role of musical director. Cast members include Bridget Adams-King, Tina Arfaee, Jordan Dell Harris, Bryson Howard, Dakota Hughes, Eddie Ledford, Evan Tyrone Martin, Dominic Rescigno, and Evan Starkweather. Shannon Golden-Starr is stage manager.

Inspired by the hit Netflix show Queer Eye, Second City audiences will follow everybody’s fave Fab Five as they help an Average Joe manifest their full potential through aggressive self-love, laugh-out-loud comedy, and more songs than you can handle, henny! Watch a two-act “episode” of the show we all thought we knew… until now. Queer Eye: The Musical Parody features all the avocados, plenty of pompadours, and maybe even a puppet or two. Say “YASS, and” to this hilarious experience where things just keep on getting better…and funnier!

Tickets for Queer Eye: The Musical Parody start at $39.00 and are available by phone at 312-337-3992 or online at secondcity.com. The show schedule is as follows beginning May 26, 2022: Thursdays-Saturdays at 8pm; Sundays at 7pm in UP Comedy Club.

Bridget Adams-King (“Claire/Rachel”) (she/her) is thrilled and so grateful to be making her Second City debut! Some of the theaters she has previously worked with include Chicago Shakespeare Theater, Kokandy Productions, Northlight Theatre, and Griffin Theatre. She is a two-time Jeff-nominated performer for her portrayal of “Kate” in If/Then at Brown Paper Box Co. and “Lucy Parsons” in Underscore Theatre Company’s 2018 production of Haymarket: A New Folk Musical. She has also appeared in an episode of NBC’s hit show Chicago PD. She is repped by Gray Talent Group. @badamsking www.bridgetadamsking.com

Tina Arfaee (“Tan”) (they/any) has been writing and performing in Chicago since 2012, most notably at The Annoyance Theater with Matt Damon Improv. With MDI, she wrote and starred in the web series In-Diana. She has also appeared on an episode of Chicago Fire, Centered the web series, and short film The Sweatshirt. Tina is a graduate of The Second City/NBC Universal Bob Curry Fellowship. She is repped by Big Mouth Talent. @tinatwocats

Bryson Howard (he/him) is a Chicago transplant from South Carolina by way of Nashville, TN, and Paris, France. After four and a half years of performing improv and scripted comedy around Chicago, the city thankfully has not yet rejected the transplant. He has been fortunate enough to perform in several shows at The Annoyance Theatre; he was part of the cast of The Queer Eye: The Musical Parody at the Playground Theater; he is an ensemble member of Baby Wants Candy, and he can be found performing improv at various venues in Chicago with his comedy partner Cassidy Russell. Twitter: @BrysonHoward. Instagram: @BrysonDallasHoward.

Heidi Joosten (Music Director/Composer/Lyricist/Orchestrator) (she/her) is thrilled and grateful to be making her Second City debut with this show that is so near and dear to her heart. A multi-hyphenate performing artist, Heidi has collaborated on over 100 new theatrical, comedic, and concert works in the Chicagoland area since her arrival in 2014. Notable writing credits include: Queer Eye: the Musical Parody (The Second City), Saint Hildegard: the Rupertsberg Tour (Theo Ubique), Micro (Music Theatre of Madison), and The Bone Harp (Underscore Theatre Company). Joosten is a highly-sought after composer with over 200 works to her name, and her award-winning music has been performed across the United States, Canada, Europe and Australia. Heidi holds a Bachelors of Music from the University of Wisconsin-Eau Claire and Masters of Music from Roosevelt University – Chicago College of Performing Arts. Proud member of ASCAP and the Dramatists Guild. www.heidijoosten.com

Eddie Ledford (“Bobby”) (he/him) is a Chicago-based actor, singer and comedian. He is a graduate of The Second City’s Conservatory, an ensemble member of the queer comedy group Baby Wine, and has performed in theaters, festivals and digital projects around the city including The Annoyance, Rhino Fest, Chicago Sketch Fest, Ordinary Peepholes, Commercial Appeal and web series Guilty. He originated the role of “Bobby” in the show’s initial run at The Playground Theatre and is very happy and grateful to reprise it at The Second City. Instagram: @_eddele

Evan Mills (Co-Director/Writer/Creator)( He/Him) is incredibly grateful to be co-directing the original musical he wrote with his writing partner Heidi Joosten, Queer Eye: The Musical Parody. He is currently an ensemble member in The Second City’s 110th Mainstage Revue and was previously an ensemble member of The Second City Mainstage revue Together at Last. Evan has toured with Second City’s RedCo and is a recipient of the Bob Curry Fellowship Program. He spent a summer in Washington D.C., performing at the Kennedy Center in Generation Gap and has also performed at the Chicago Symphony Orchestra with The Young Person’s Guide to the Orchestra. He has been featured in the Break Out Comedy Festival, LA Laughter Comedy Fest, and the Comedy Central Showcase. You can check out his original music on Spotify (“A Little Bit Alexis” cover and “Sissy Boy”) and follow him on all social media platforms @awkvanmills.

Dominic Rescigno (“Antoni”) (he/him) is experiencing a dream come true doing this show with these people on this stage. He is a graduate of Second City’s Comedy Studies program and is currently finishing the Conservatory. He has performed for Lyric Opera of Chicago, The Onion, ClickHole, Walt Disney World, and starred in Chicago’s long-running comedy Tony N’ Tina’s Wedding. His two webseries The Dominics and Dominic Tonight! have been critically ignored.  www.dominicrescigno.com | @dominicrescigno

Stephen Schellhardt (Co-Director/Choreographer) (he/him) is thrilled to be a part of the Queer Eye: A Musical Parody family. He is a Jeff Award-winning director and actor, as well as choreographer, producer, educator, and casting director. In Chicago, Stephen has worked with the Marriott Theater, Writers Theatre, Drury Lane Theatre, Mercury Theater, Chicago Shakespeare Theater, About Face Theatre, Northlight Theatre, Chicago’s Lyric Opera, The Goodman Theatre, Porchlight Music Theatre, Ravinia Festival, Northwestern University, and BoHo Theatre, where he served as a company member and Artistic Director for six years. National tours include Altar Boyz. International credits include Jane Austen’s Persuasion at The Royal Winchester Theatre in England and the Shanklin Theatre on The Isle of Wight (Chamber Opera Chicago). From 2014-2017, Stephen served as Associate Producer and Casting Director at Writers Theatre in Glencoe before becoming a visiting professor at Northwestern University and then moving to The Chicago College of Performing Arts, where he now holds the title of Head of Musical Theatre. Stephen is a graduate of Carnegie Mellon University’s School of Drama and a proud member of the Actors Equity Association.

Evan Starkweather (“Jonathan”) (he/they) is a Chicago-based performer and writer making their Second City debut. They were last seen performing karaoke at a bar in New Orleans during Mardi Gras, but before that, they wrote and performed numerous sketch and musical variety shows at The Annoyance, The Playground, and The Second City Training Center. They are a graduate of The Second City Conservatory, and their music video “Platonic Gay Best Friend” has been featured on Funny or Die. @evanspelledellen