Jane Lynch was honored Thursday night with a Lifetime Achievement Award for her outstanding contribution to comedy. The honor was presented to the Emmy and Golden Globe winner by both the Chicago Comedy Film Festival and The Harold Ramis Film School at The Second City Training Center, where the opening festivities for the sixth annual fest were held.

The trailblazing “comedy badass of stage and screen,” as Second City Training Center Artistic Director Matt Hovde introduced her, was reflective during her remarks. “Our greatest gift is our ability to laugh at ourselves and our situation,” she said. “It’s a scary time right now, but love and grace are everywhere.”

In addition to screening her short film “Writer’s Block,” Lynch spent time with Second City Training Center students to talk about her approach to creating extreme characters, her experience as a member of The Second City Touring Company and being called a role model. 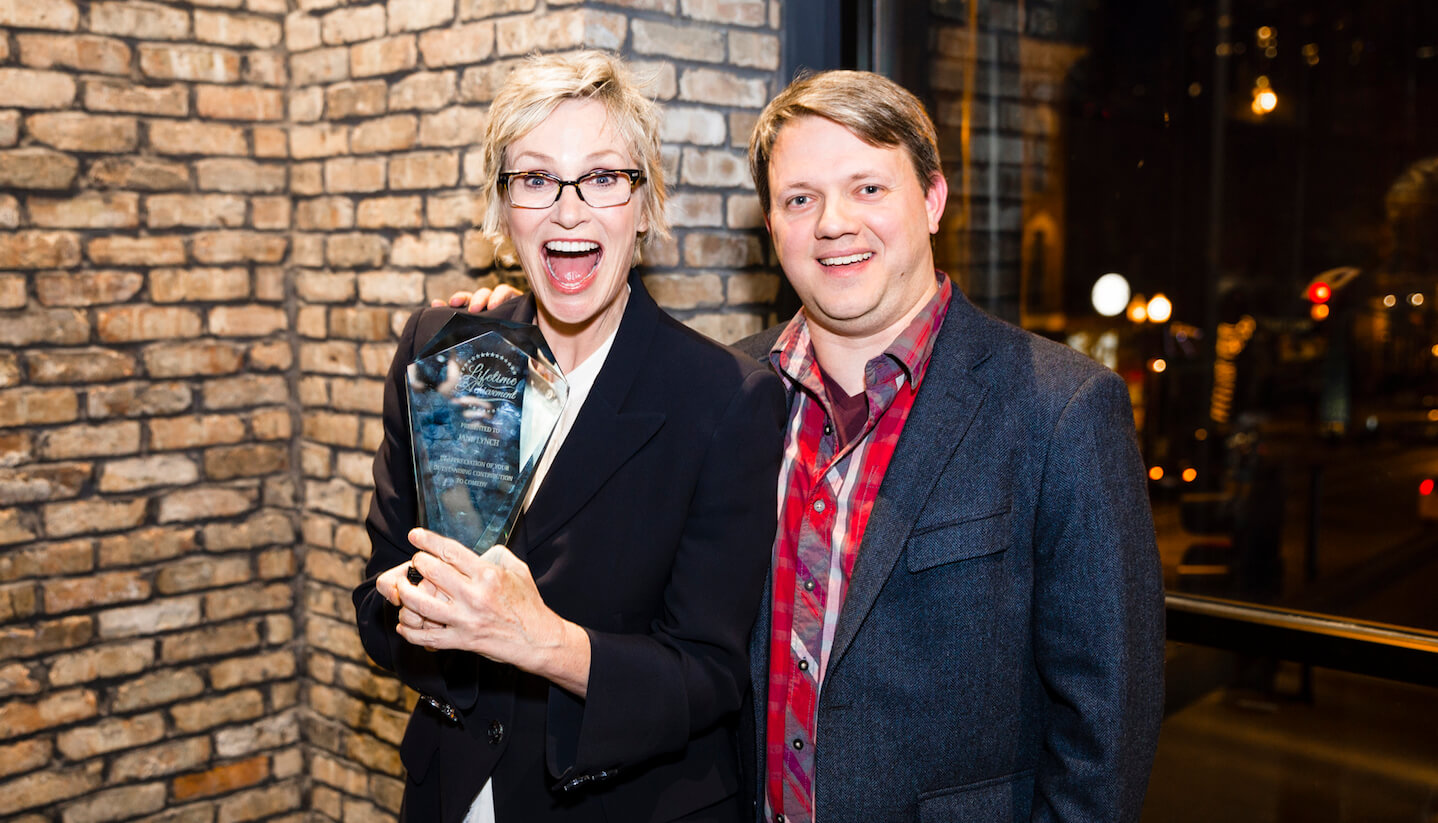 “There’s no better training. Nothing throws you.”

Lynch began by telling students gathered in Donny’s Skybox Theatre about her less-than-memorable audition for Second City. “I can’t say that I did great,” she admitted. “When they called, I was shocked.” The classically-trained actress was cast in the Touring Company, and that’s when she says everything changed. “Once I started doing sketch, everything blew open,” she said. And as for her time on the road with Second City? “There’s no better training. Nothing throws you.”

As further proof of the value of her Chicago roots, Lynch offered up this anecdote. “When I was on ‘Glee,’ the costume woman asked, ‘Are you from Chicago?’ I said, ‘Yes, why?” ‘You hang up your clothes.’”

When approaching a new role, Lynch explained, she always starts by asking some crucial questions. “What is the vulnerability of this person? What do they not want you to see?” A self-described “feelings person,” her approach to creating her signature larger-than-life characters is all about getting grounded--and then “blowing it up.” “I love to create a cage. Then I bounce around in that cage freely,” she said. ”I’m like a baby in a playpen.”

Her work in Christopher Guest’s films (“Best in Show,” “A MIghty Wind,” “For Your Consideration” and “Mascots”) has also allowed her to flex the improv muscles she developed during her tenure at Second City. “It’s as improvised as you think it is,” she explained. “There’s no rehearsal. It’s a lot of preparation and then showing up and jumping off the cliff.”

These days, Lynch wears many different hats as a performer: actor, singer, dancer, even game show host. Her method of finding the character doesn’t change, no matter the platform. Even for her “Hollywood Game Night” gig, she explained, “I’m playing a character. That’s how I settle into it, and now I’m relaxed and can enjoy it.”

Often called an LBGTQ role model, Lynch says it’s not a title she ever expected, maintaining, “I never set out to educate. I just do my thing and don’t hide it.” That doesn’t mean she’s unaware of how impactful the projects she’s been a part of have been. “‘Glee’ helped so many kids. If it could come back, that would be a great thing,” she said. “It’s okay to be Muslim, it’s okay to be gay, it’s okay to be a woman.”

The Harold Ramis Film School at The Second City Training Center is the only film school in the world focused entirely on comedy. Applications are currently being accepted on a rolling basis.