Eugene Levy spoke to a crowd of film students and program graduates in a two-hour talk with Harold Ramis Film School chair Trevor Albert. The Second City and SCTV alumnus, in Chicago for the Schitt’s Creek Up Close & Personal tour at the Chicago Theatre, opened up about his unlikely path to comedy, cutting his teeth at The Second City, making TV magic from SCTV to the present, and the people and experiences that have shaped him along the way. 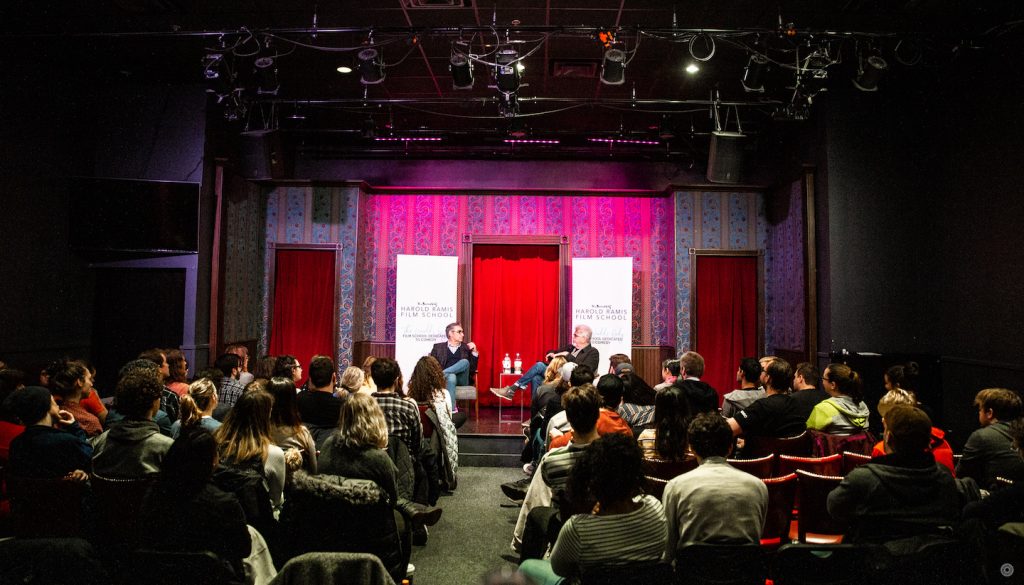 Growing up in the working class steel town of Hamilton, Ontario (“the Pittsburgh of the north”), show biz was never on Levy’s radar. He got into performing after seeing the attention his older brother’s singing quartet got and started his own group. When the trio added comedy sketches to their folk music routine, “it was kinda fun to hear some response from the audience,” he said. “I kinda liked it.”

Levy began to garner more attention around school with the comedically esoteric musings he kept squirreled away in a notebook titled “Poetry, Prose and Cons.” They made his peers laugh, prompting a call for him to run for student body president. Having found his voice on a paper, Levy marveled at the opportunity to share his words on poster-sized opportunities. One read: It’s a bird! It’s a plane! No, it’s a bird. Vote Levy!  “I actually won the election and became president of the student council,” he said, with more than *a little* residual pride.

At university, Levy spent more time with the drama and film clubs--where he met fellow student Ivan Reitman--than he did in class. He quit school, much to his parents’ chagrin (“It wasn’t pretty...their disappointment was palpable”) and asked Reitman, now at work on his first film, for a job. There was one position left: coffee boy.

“That was my first job for $60 a week as coffee boy on Ivan Reitman’s first film...if that job had not been available, I probably would never have left Hamilton,” he said.

Reitman offered him an acting role in his next project, and Levy jumped at the chance--not because he’d been bitten by the acting bug, but because when the director called “that’s a wrap,” actors got to go directly to their cars and drive home. At this point in his life, the possibility of forging a career in entertainment still hadn’t entered his mind (“I never knew that this is what I wanted to do”) but not having to stick around to break down equipment ever again definitely had.

From ‘Godspell’ to Second City

When the New York production of Godspell came to Toronto, Levy auditioned, as did his friends and colleagues Martin Short, Andrea Martin, and the “just so lovable” Gilda Radner, who sang "Zip-a-Dee-Doo-Dah" at her audition. This was a huge break for Levy, as the one-year contract meant getting a check every week for the first time in his fledgling career. After taking over the lead role when many of the cast members defected to the new Second City outpost in Toronto, Levy decided to head to the Old Firehall himself to see what this Second City thing was all about.

Working at The Second City was “the most amazing, exciting thing in the world,” he said. Intoxicated by the proximity of the audience and petrified by the improv, “I was learning as I was going,” he admitted. “Second City was the best school of comedy for me.”

And the best teacher? “I think if I learned anything from anybody at Second City, it was Brian [Doyle-] Murray. In all his scenes, he’d just sit in a chair and drink a coffee.”

The dawn of ‘SCTV’

Shortly after SNL’s debut, Second City co-founder Bernie Sahlins decided he needed a way to get ahead of the hot new show poaching his talent, and the idea for SCTV was born. “It turned from a satirical show into a character-driven show that had satire in it,” Levy said. “The first year was a learning experience.” Their creative North Star, Harold Ramis, helped lead them into the great comedic unknown. “Harold was head writer, and all we wanted to do was please Harold,” he explained. The cast’s only goal was to “write something that [Harold] would love and laugh at.”

“He was just so positive about everything and exemplified the yes and philosophy of comedy,” Levy continued. “He was the gauge as to whether something was good...Harold was the arbiter of what worked and what didn’t work.” And what sometimes worked was something uncouth. “For somebody so smart, he could write the cheapest punchline.” 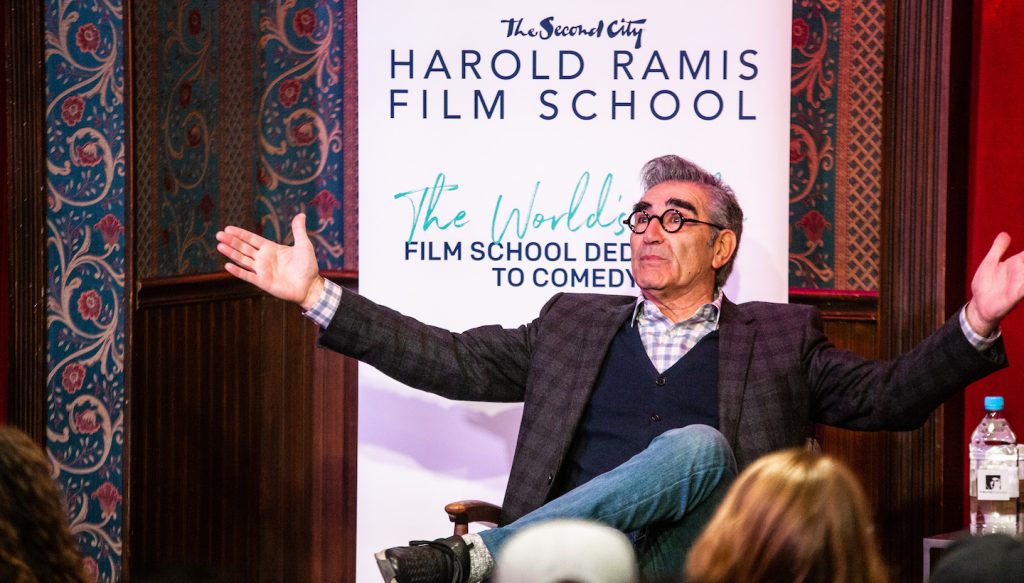 Levy also talked about his experiences with Christopher Guest on their improvised films like Best in Show, A Mighty Wind, and Waiting for Guffman, their first creative pairing, which they hashed out the characters and plot line for in a cabin over the course of two weeks. He explained how detailed the outlines for those films were, because “You can’t have an improvisational free-for-all” in a movie. He stressed the importance of understanding that while you may be interested in telling a story in a funny way, the most essential thing you’re doing is telling a story (and noted the necessity of there being a place like the Harold Ramis Film School to teach budding filmmakers just that).

Levy defines a critical aspect of writing great comedy to be creating grounded characters, like those brought to life by Catherine O’Hara, who exhibits “a chameleon-like quality when she gets into a character,” Levy said about his longtime collaborator and Schitt’s Creek co-star. “She brings so much to whatever she takes on...we approach our work as actors, not as funny people. We don’t consider ourselves funny people in real life.” Agree to disagree.

Keeping it in the family

The prolific actor and writer co-created Schitt’s Creek with his son Daniel, who also stars in the PopTV show--as does his daughter, Sarah. What’s it like for Levy to work side by side with his offspring? “Oh my god, my son is doing a scene with Catherine O’Hara--and holding his own,” Levy said. “That’s the most surreal for me.”

The conversation ended with a visibly emotional Levy saying, “Talking to the students of the Harold Ramis Film School is one of the honors of my life.”

Again, let’s agree to disagree. The honor was all ours. 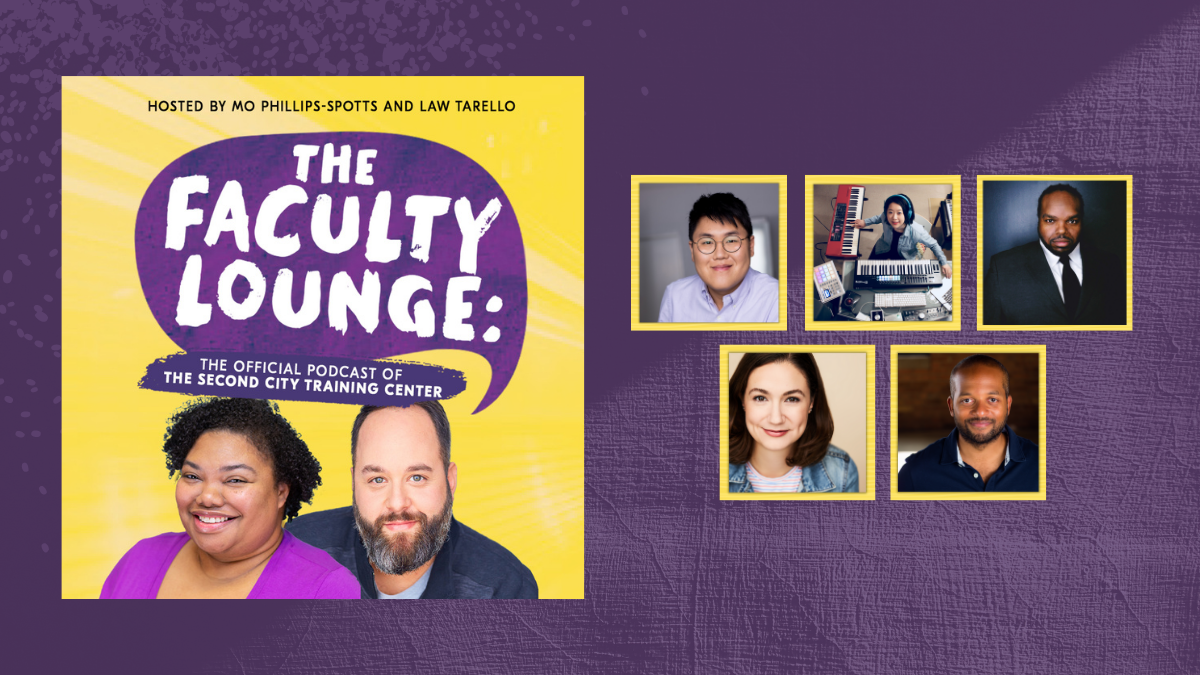 This week in The Faculty Lounge with Mo Phillips-Spotts and Law Tarello we bump into our first WILDCARD episode Hear... 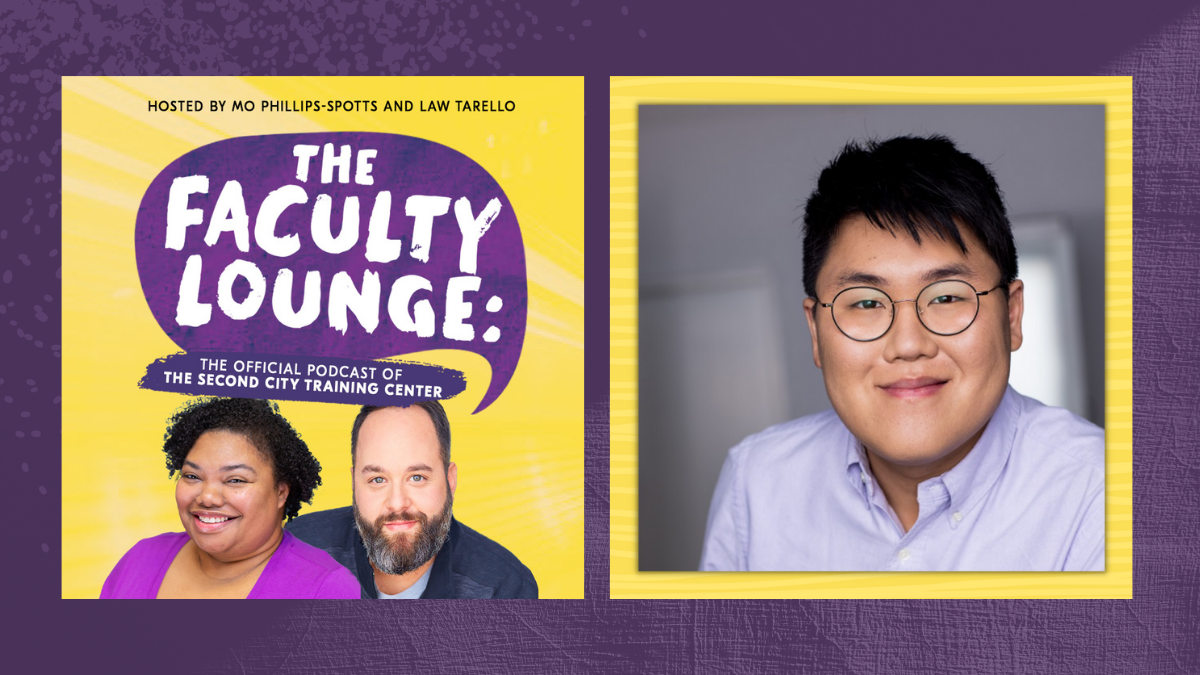