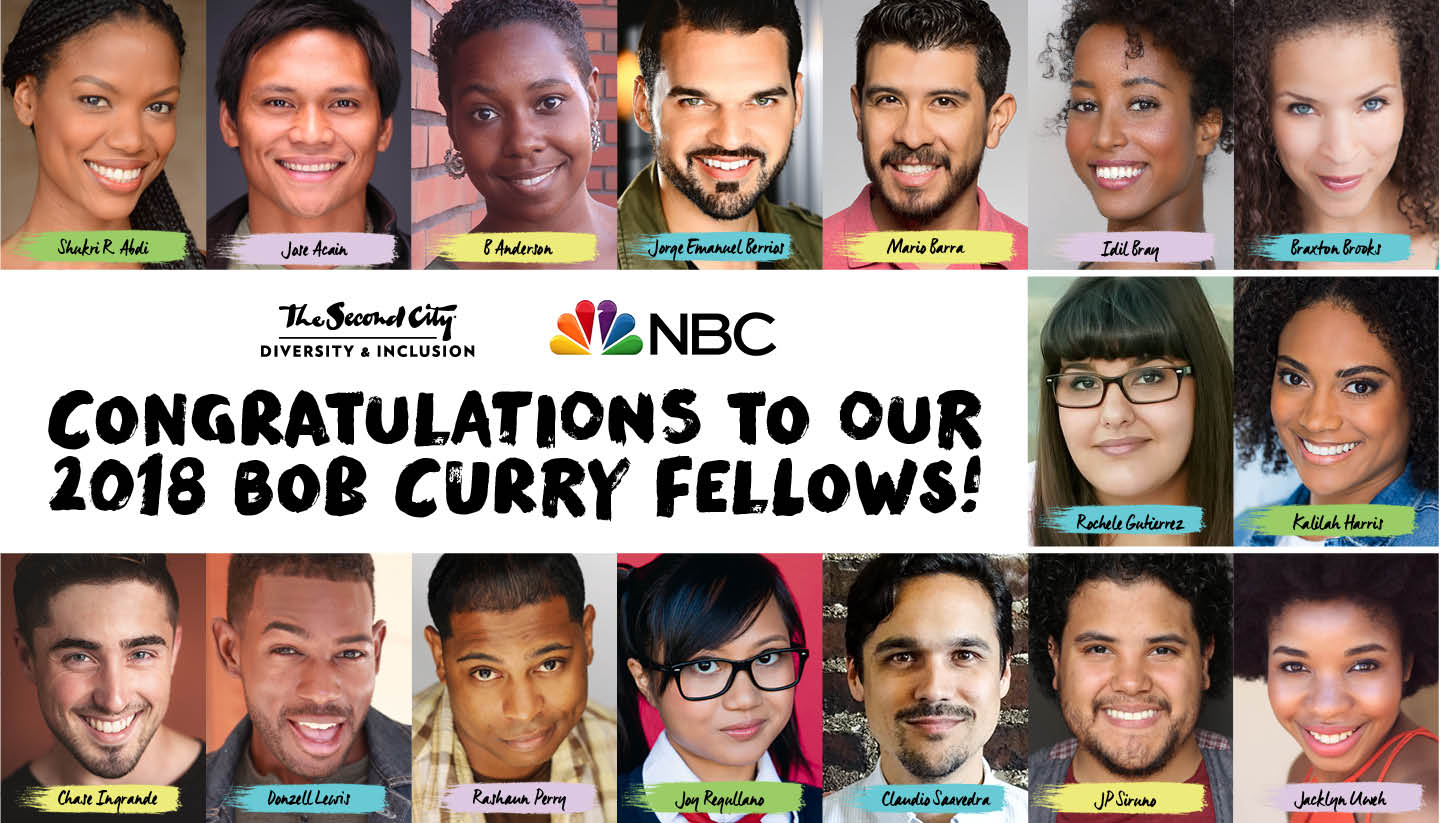 NBC Universal Bob Curry Fellowship
The Second City Hollywood is proud to announce our 1st annual Bob Curry Fellowship. This one of a kind professional development master program offers up to 16 fellowships to qualifying actors and improvisers from diverse multicultural backgrounds to train and study at the Second City Hollywood Training Center. Taught by Second City’s top instructors and directors, this unique fellowship boasts a rigorous master program for serious-minded talent seeking a career in sketch comedy. Our highly competitive fellowship is tuition-free and awarded to exceptional talent selected by auditions and adjudicated by Second City directors and producers.

Who is Bob Curry?
Bob Curry was a Second City alumni and the first African American actor who performed on the our resident stage in 1966. A Joseph Jeff Award winning actor and inspiring director, he coached and mentored many actors in Chicago’s theatre community. Our fellowship is named in his honor.

The Second City Co-Owner, Andrew Alexander: "It's fantastic to see how far we've come as an institution since we started our Outreach program in 1992," states Andrew Alexander, CEO & Executive Producer of The Second City, Inc. "But the work is not done and I'm thrilled that our team has created such a valuable and intensive program of study that we can offer tuition free in the name of one of our treasured alumni who was a true trailblazer."

Shukri R. Abdi is an LA-based performer, writer, and TV producer. When not on The Second City stage, Shukri performs at the Upright Citizens Brigade with musical improv teams Baby Wants Candy and The Pick Up, and with sketch team The Audacity on Maude Night. Shukri is also Supervising Producer and Head of Content of BET’s comedic game show, Black Card Revoked.

Jose Acain is a graduate of the conservatory and directing programs at Second City. He currently performs with Second City’s house improv team Shortcake, tours with M.I. productions, a main company member at ComedySportz LA, and a company member at Independent Shakespeare Company. Lots of love to Erin and Kaia Fae for always believing. Twitter & Instagram: @iamacain

B Anderson was raised in Pacheco,CA. Being the youngest in a family of strong personalities she searched for her own uniqueness. At 14 she discovered her knack for comedy when she wrote a stand up set for a friend. It was then that B's interest in comedy began. In 2012 she got into improv and found her niche!

Mario Barra is originally from the city of Puebla in Mexico. He's studied improv and sketch writing at Second City, iO West, and UCB but all of them were in English so he got completely lost in translation. He was recently a writer for the 2018 CBS Diversity Showcase. He enjoys shooting funny videos and posting them on Instagram thinking that will lead him somewhere in life. For more info go to mariobarra.com Follow him on Twitter, Snapchat, Instagram @mariobar96

Jorge Emanuel Berrios is Cuban-Puertorican (Sortarican) from Miami FL. He is a Second City Graduate, co wrote and performed in the first all latinx Second City show, "HisPanic Attack". Jorge wrote for the CBS Diversity Showcase 2017 and wrote/performed in 2018. Catch him perform with his improv team SPANGLISH. His strongest influences are Mel Brooks, Jim Carrey, and Desiderio Arnaz.

Idil Bray is a graduate of the Upright Citizens Brigade Theater NY, and a current Grad Revue student at the The Second City Conservatory Hollywood. She has appeared in several national commercials, performs sketch and improv around Los Angeles, and annually directs the LA chapter of a global art installation, via Heidi Latsky Dance, commemorating International Day of Persons with Disabilities. Idilbray.com   Instagram @idilbray

Braxton Brooks is the Sharknado franchise #1 fan. She is also a writer and comedienne who has performed on and off-Broadway and been featured in national commercials and print campaigns.  Check her out at BraxtonBrooks.com or on Facebook @braxtonbrooks.

Kalilah Harris was raised in Montgomery, AL and is confident that she would have been Beyoncé had the real Beyoncé not beat her to it. This former pageant queen is a voiceover artist passionate about storytelling, producing art, and world travel. Her goals include a perfect credit score and fluency in French, as Hood Rat is her native tongue.

Chase Ingrande is so happy that you’re here! Chase is an alum of Columbia College and a grad of The Second City Conservatory, Chicago. Previous credits include Thomas Jefferson and Jesus Christ in 177FOX at The Second City, Hollywood. When he’s not worshipping Toni Collette, he’s writing his one-man Scientology musical - Shelly! Thank you parents, friends, and Louis! IG: @funnychase

Donzell Lewis is an actor and comedian originally from Richmond, Va who is fully loving his life out her in the wild wild west! He holds an MFA in theatre from Virginia Commonwealth University and is currently an ensemble member on Second City’s Team “Bandwagon”. Recent credits include the movie “You Should Meet my son 2!”, the podcast “Purple Panties”and the hit web series “Boss Cheer”.

Rashaun Perry is a Second City Conservatory graduate from Detroit, Michigan and future BET award recipient. He moved to Los Angeles and began appearing in short films such as “Love, Okinawa” which made a showing at the Guam film festival. A former project manager at Dejavu, he spends his spare time performing with his Improv team, Gary.

Joy Regullano has performed on improv / sketch house teams at UCB, Second City Hollywood, and iO West. TV credits include CRAZY EX-GIRLFRIEND, MODERN FAMILY, and SUPERNATURAL. Her writing has placed in the Page Awards Top 25 comedy pilots, she was an inaugural Sesame Street writing fellow, and she has her own YouTube channel with 1M+ views

Claudio Saavedra is a Southern Californian native. He has loved comedy since he was a child. Truly humbled and honored to be part of such an amazing ensemble and opportunity.

JP Siruno is an Actor/Comedian, an AMDA Los Angeles Alum, and is from Satan's firebox Yuma, Arizona. JP has done shows at the former iO West, The Acme Factory, and is a cast member of TMI Hollywood performing weekly at The Hudson Theater.

Jacklyn Uweh is a Stockton-bred writer & performer. Since discovering her comedic voice as a mime - she’s studied improv & sketch at SC Hollywood, UCB and UC Irvine. She recently completed her run in the sketch show, Live Rude Girls and can be seen performing with Eightball and in 177Fox! Connect with her: IG @blkjack76 and jacklynuweh.com